Leadership of Russia’s military enterprises, whose weapons are killing Ukrainians, are still not under sanctions

This morning, Kyivites woke up again to the sounds of Russian missiles. A kindergarten and another house, which dozens of children called home, were destroyed.  Explosions were also heard in Rivne region.  Kharkiv and Mykolayiv were under enemy fire almost all the time. Severodonetsk is 90% destroyed by the Russians.

Despite all these atrocities, those responsible for making Russian missiles are still not under sanctions.

After all, almost the first thing that sanctions should do is to paralyze the Russian defense industry. While sanctions are successfully imposed on concerns and design bureaus, top managers of these plants remain unpunished.

Who has remained out of the sanctions lists despite the fact that they are personally responsible for the production of weapons that kill Ukrainian children?

Russia uses Caliber cruise missiles mostly to destroy civilian targets. Production of “calibers” is carried out by the design bureau “Novator”, the CEO of which is Farid Abdrakhmanov. None of the partner countries has yet imposed sanctions on Abdrakhmanov.

The Solntsepek heavy volley fire system and T-90 and T-14 tanks are the hallmarks of Uralvagonzavod (UVZ).  The plant can be considered the only manufacturer of tanks in Russia. He modernizes tanks, manufactures new models of tanks “Armata” and “Proryv”. After the full-scale Russian invasion in Ukraine, UVZ lost access to goods and technologies that could strengthen Russia’s security and defense sector and was included in the sanctions lists of all Ukraine’s partners. At the same time, the CEO of the concern, who is also a member of the bureau of the central council of the Union of Machine Builders of Russia, Alexander Potapov is still not under sanctions.

The infamous Iskander missile complex was developed by the Machine-Building Design Bureau in Kolomna, Moscow Region. The CEO of the bureau, Sergey Pitikov, is still not under sanctions in any country.

“Tochka U” which the Russians hit the station in Kramatorsk with the inscription “For the children of Donbass” is made by “Votkinsk plant”.  At least 52 people were killed, including children.  The general director of this plant Igor Churbanov is not under sanctions yet.

The K-52 attack helicopter, known as the Alligator, took part in attacks in Kyiv, Kharkiv and Kherson regions. The manufacturer of Alligators is Arseniyiv Aviation Company “Progress” named after  N. Sazykina. Its managing director is Denis Paltsev.  He is not under sanctions from any country.

On February 28, there were at least seven Su-34 front-line bombers in the Kharkiv region, which also destroyed residential areas in Kharkiv. These aircraft are manufactured by the Novosibirsk Aviation Plant named after V Chkalov. Most of its shares (74.5%) belong to Sukhoi company. One of the key persons of the mentioned company is a member of the Board of Directors Sergey Korotkov.  Despite the fact that Korotkov is also a member of the board of the Military-Industrial Commission of the Russian Federation and deputy CEO of the public joint-stock company “United Aircraft Corporation”, he has not yet been sanctioned.

Learn more about the sanctions lists of individuals and legal entities of the Russian defense industry on the “War and Sanctions” web-portal: https://sanctions.nazk.gov.ua/en. 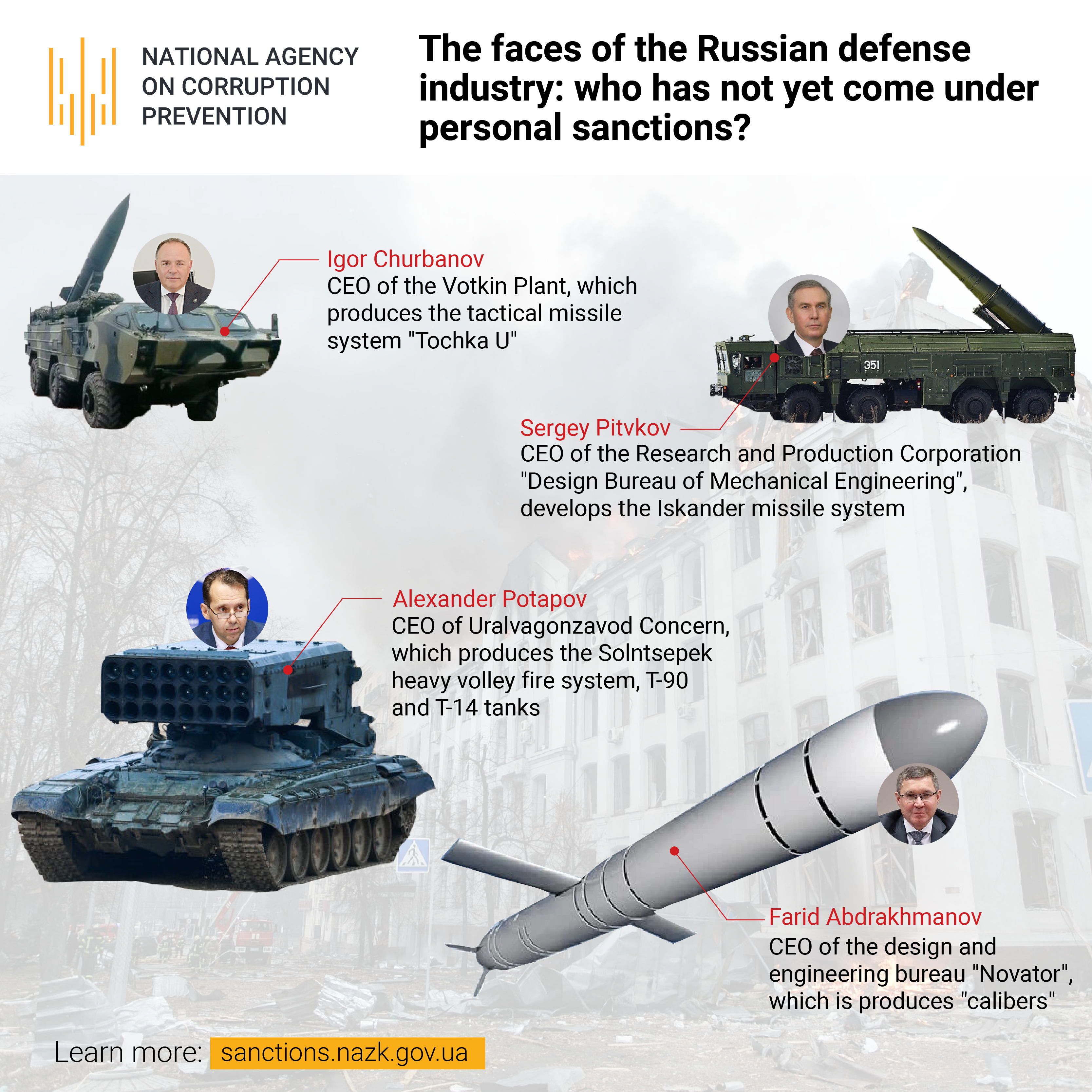 0
Important notifications
No new notifications
5 months of war: the results of the work of the NACP
Ukraine’s Corruption Prevention Agency calls on international partners to impose sanctions on those involved in jailing Russian councilor for seven years after criticizing the war in Ukraine
Ex-manager of Russia’s top energy SOEs, who has condemned putin’s regime and resigned from the company because of Russian aggression, is removed from the list of candidates for sanctions
News Calendar
News Calendar