The effective work of anti-corruption compliance and standards of integrity in business is one of the key factors for the recovery of Ukraine and its movement towards EU membership, – the Head of the NACP at a meeting with AFA

After receiving the status of a candidate for membership in the European Union, Ukraine undertook the commitments to strengthen the fight against corruption. Business plays an important role in the life of any country. Therefore, preventing corruption and spreading the principles of integrity in the private and public sectors is a key prerequisite for attracting investment, restoring the economy and civil infrastructure of Ukraine. This was stated by the Head of the National Agency on Corruption Prevention (NACP), Oleksandr Novikov, during a meeting with the Head of the French Anti-Corruption Agency (AFA), Charles Duchaine.

Oleksandr Novikov told his French colleague about the work of the NACP and the experience of the Agency’s cooperation with business.

“After the Russian full-scale invasion into Ukraine, a lot has changed in the work of the NACP, but we continue to fulfill our main task: the Agency is responsible for the formation of anti-corruption policy and prevention of corruption in Ukraine. In June, the parliament adopted the Anti-corruption Strategy until 2025, developed by the NACP together with the public and international partners. The Strategy outlines the key problems faced by the private and public sectors, as well as suggested ways to solve them, primarily by minimizing corruption risks. We are currently holding public discussions on the draft of the State Anti-corruption Program, which should become a working tool for the implementation of the Strategy. Experts from various fields, including business, are involved in these discussions”, — noted the Head of the NACP.

He added that the Agency has already developed a number of effective tools for the private sector. For example, the Standard Anti-Corruption Program of Legal Entities was approved by the NACP. It takes into account the best global practices and is close to international and national standards for the prevention of corruption.

“The NACP helps public and private organizations in building compliance systems. For example, in Ukraine there are authorized persons/units for the prevention and detection of corruption (anti-corruption officers). Like compliance officers in business, anti-corruption officers, who work in almost all state bodies, enterprises or local governments, organize anti-corruption work in the organization, identify corruption risks and propose measures to minimize them. The activities of the authorized persons are coordinated by the NACP”, — emphasized Oleksandr Novikov.

Charles Duchaine and his colleagues presented the positive results of the anti-corruption reforms in France, which took place with the adoption on 9 December 2016 of the Law on Transparency, Anti-Corruption and Economic Modernization, known as the “Sapin 2” Law, in response to the critical remarks of the OECD Working Group on Bribery (WGB). These results were since then praised by the WGB, which recognized that “the creation of the AFA and the introduction into French law of an administrative compliance obligation by article 17 of the Sapin 2 Law have placed prevention and the development of internal compliance measures at the heart of France’s anti-bribery policy.” This approach is considered “a notable leap in the French legal framework for combating bribery that has allowed France to regain credibility and visibility in this area.”

Charles Duchaine elaborated on the practice of conducting audits of corruption risk management systems in private and state-owned companies, both at the AFA’s initiative and under the terms of deferred prosecution agreements. He also mentioned the guidelines published by the AFA to help organizations, whether public or private, big or small, French or foreign, to design and implement effective anti-corruption programs.

“The risks that corruption poses to public resources, taxpayer accountability, citizens’ trust in state institutions, the preservation of sovereignty and the rule of law require governments to implement an effective anti-corruption policy. Equally important is leadership and the commitment to preventing corruption in every private company. This view, shared by anti-corruption practitioners around the world, must continue to guide our actions“, – remarked Charles Duchaine.

The parties agreed to strengthen cooperation in preventing corruption and continue the exchange of practical experience at the level of the relevant structural units of both agencies.  Oleksandr Novikov thanked his French colleagues for their comprehensive support of Ukraine and emphasized the importance of strengthening cooperation in the fight against corruption between institutions.

“The NACP is ready to share its best practices and developments within the framework of the exchange of experience with the AFA” —  added the Head of the NACP.  At the end of the meeting, Charles Duchaine expressed admiration for the resilience of Ukrainians and wished Ukraine a speedy return to peaceful life. 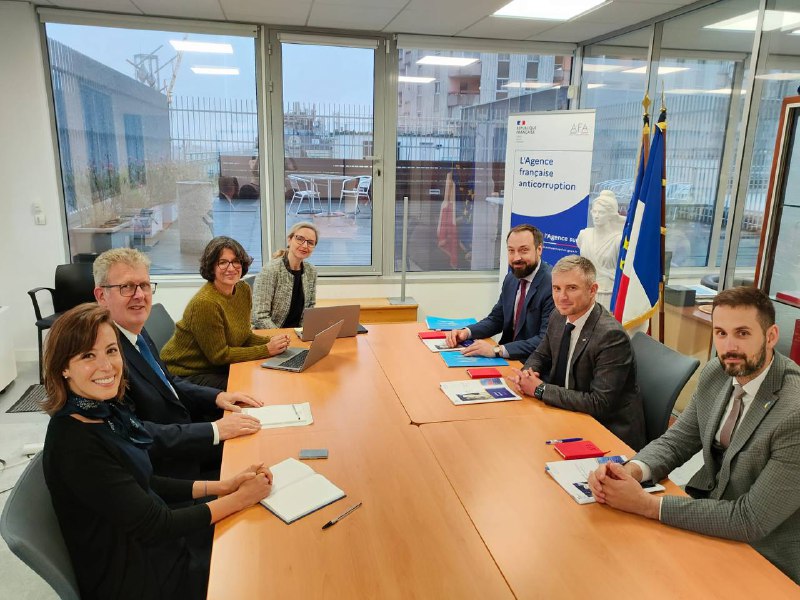 0
Important notifications
No new notifications
Corruption risks while limiting the circulation of medicatesduring a Martial law: How one law can destroy the health of millions of Ukrainians
The Head of the NACP advocates for a swift introduction of legislative regulation of lobbying and parliamentary ethics to reduce the risks of political corruption in Ukraine
The effective work of anti-corruption compliance and standards of integrity in business is one of the key factors for the recovery of Ukraine and its movement towards EU membership, – the Head of the NACP at a meeting with AFA
News Calendar
News Calendar